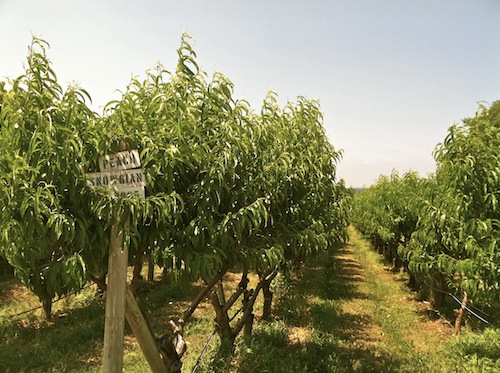 There are typically only a handful of days a year when it is painful not to have air conditioning.  We're going through them now.  It's still not too bad, though, and there are typically plenty of ways to beat the heat, so I won't complain.

The weekend started off with the usual stop at the farmer's market, where we met up with friends, watched the boys run around, listened to music, and bought a large bag of goodies.  That afternoon, I took the boys up to the farm, where we played on the playground, ate gelato, watched a magician, and picked peaches.  Sunday morning, we headed back to Walden Pond.  It's such a great place to have nearby - so pretty, and perfect for the kids to play in the sand and swim until their fingers wrinkle like raisins.  A nice place to escape the heat for sure.

We also managed to get some things done around the house, and we rounded out the weekend with runs through sprinklers and popsicles.  I'm only a couple weeks away from starting my new phase, and that fact is really sinking in now.  My goal for the week is to clean out my desk and really start getting excited about the change.  It's going to be good for all of us.
Posted by Mary