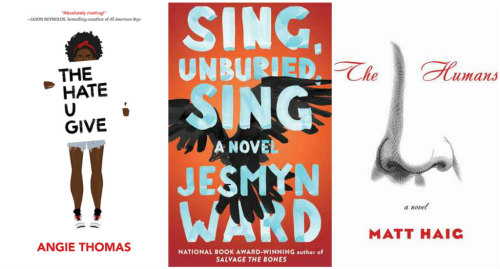 The Hate U Give, by Angie Thomas.
The main character is a sixteen-year-old girl. She lives in a poor and rough neighborhood but attends a prep school in a more affluent suburb. She witnesses the fatal shooting of her childhood best friend by a white police officer. I loved this book. It is a YA book that is well-written, fast-paced, and thought-provoking. It provides different perspectives, and it challenges the reader to put themselves in the shoes of the characters.

Sing, Unburied, Sing, by Jesmyn Ward.
"Sorrow is food swallowed too quickly, caught in the throat, making it nearly impossible to breathe." The descriptive and beautiful language of this book instantly drew me in. It is beautifully and elegantly written. It sometimes feels like reading a song or a poem. It's a character-driven story about an African-American family in Mississippi, and it's also a story about ghosts. It's mystical, and it will hit you in the heart - there were parts that literally made me ache.

The Humans, by Matt Haig.
I wasn't quite sure what to make of this book at first. I read it at the recommendation of a friend, who said the payoff was worth it, and she was right. The story is unique - the main character is a math professor who solves the secret of prime numbers, an enormous mathematical discovery that would change life on earth, leading to technological advancements and even solving the problems of illness and death. Unfortunately for him, aliens have learned of his discovery, and they send one of their own to kill him, assume his identity, and ensure that his information was not shared with anyone. The story opens as the alien has entered the body of the math professor and has to learn how to navigate life as a human. The first half of the book is focused on his observations of humans and human life. As he becomes emotionally attached to his human life, his reflects become deeper and more interesting. It culminates in a letter of advice he leaves for his son. They're all wonderful, but here are a few to entice you to pick up this highly entertaining book: