"the most wasted of all days is one without laughter." --e.e. cummings

Take a look at this and laugh. It's a good way to start a Monday morning. (Thank you, Em, for passing this along!)

I should also mention that I love Tina Fey. She is smart and funny and great - can't wait for more 30 Rock!
Posted by Mary No comments:

K and I take an annual trip to Vermont in the Fall. There really is nothing like Fall in New England. One of the things we enjoy doing is visiting the Hildene Craft Fair. It's full of beautiful things - paintings, pottery, clothes, soaps, blankets, jewelry, foods. One of the beautiful things we purchased there was a small painting by an artist named Michael Wolski. His paintings are beautiful - mostly of children playing outside in nature. They are joyful and peaceful. Check out his paintings and enjoy! 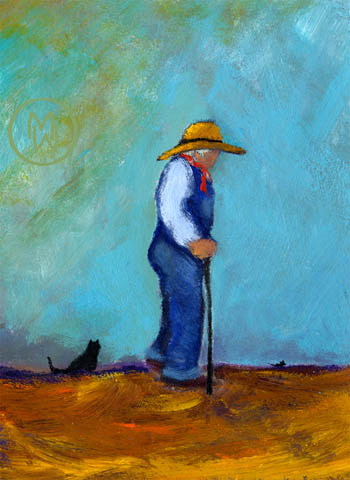 via marmalade productions
Posted by Mary No comments:

"Rather than love, than money, than faith, than fame, than fairness... give me truth." — Chris McCandless, expanded on the original quote by Henry David Thoreau
Let me start by saying that I don't go to the movies anymore. I saw two movies at the theater in 2007. I guess that's a typical life with a baby. Anyway, the video availability has finally caught up with us - all those movies that came out in 2007 are now available for the viewing pleasure of us homebodies. So if my movie posts seem a bit dated, well that's just the way it goes.

We actually bought the soundtrack from Into the Wild before seeing the movie. The music is different from typical Pearl Jam - very raw and haunting. It's a short CD, and I'll admit that I didn't quite get it with the first listen, but as I listened to the words, I got drawn in by the music. It is sparse and vocal - a good CD for listening to in the car, particularly if you have the luxury of time and have nowhere to be. Eddie Vedder's voice is perfectly imperfect, and the lyrics are beautiful and thoughtful: "We have a greed, with which we have agreed...and you think you have to want more than you need...until you have it all, you won't be free. Society, you're a crazy breed. I hope you're not lonely, without me."

And then we saw the movie. Of course, I didn't realize it at the time, but the music really is the movie. They are one and the same. It is a remarkable and thought-provoking movie, and yes, sad too, but it's one that you can't really talk about afterwards. At least not until you've let it sink in. If you haven't seen it, see it. If you have, then you already know.
Posted by Mary 1 comment:

Here is a page from the Eartheasy website that discusses ways to simplify your life. Check it out and see if you can find some ideas for yourself.

One other site I found here that excited me is http://www.catalogchoice.org/. I complain all the time about how much junk mail we get - annoying and awful for the environment as well. I do try to take the time to call catalog companies to get removed from their list, and it helps, but the next time I buy something, I end up right back on again. I guess we all have to be diligent about it, but I'm keeping my fingers crossed that this site will help make it easier for me to do so.

There are so many ways to simplify your life and help the environment at the same time. So I'll probably address this in future posts as well. I am far from totally "green", but as my friend S recently said, "being aware is a step in the right direction".
Posted by Mary 1 comment:

"Joy is what happens to us when we allow ourselves to recognize how good things really are." - Marianne Williamson

I have always been good at savoring great moments in life - whether it's watching a sunset, listening to the birds sing, laughing with friends, enjoying a good pint of beer, or screaming at a close basketball game. Life is too good to let it pass you by.

However, I have found it increasingly difficult to do this lately, so I have to remind myself and find new ways of finding peace throughout the day, often in places I wouldn't have appreciated in the past. For example, I have always hated grocery shopping. I'm not even really sure why I've always hated it - it has just always felt like a chore. I've made the decision to make it a time of my week that I can appreciate. I make a list of dinners for the week ahead of time, adding to my grocery list at the same time. Going with a list and being organized helps remove the stress of what to make for dinner every night, too. It also makes the trip more efficient. I bring my iPod and a cup of coffee, and I can listen to some good music and appreciate the "me-time" away from the house. And finally, I am trying to reduce the number of grocery-store trips overall by making small trips to the farm up the road. (This is also done in an effort to buy more local/organic, particularly produce.)

My commute is another time of day that I am learning to appreciate more. Most often, I spend the time singing out loud, but every now and then, I turn off the radio and just allow my thoughts to wander. Everybody should get a little bit of quiet every day.

I LOVE this blog entry from Real Simple. It communicates exactly what I'm striving for - how to find serenity in the everyday chores we all must endure.
Posted by Mary No comments:

I love sports. Not all sports - I can't sit and watch a boxing match with much interest, but even then I can manage an appreciation for the competition. My mom and sisters think I'm crazy and are not really sure how I ended up becoming a sports fan after essentially growing up surrounded by women.

It was an evolution for me. Lots of little and not-so-little influences. Like talking to my dad on Sunday afternoons while he was watching the Buffalo Bills game on TV. Being forced to watch Atlanta Braves baseball games with my friends (mostly guys, obviously). It really started to take hold in college, though. I had a roommate who loved the Atlanta Braves and NASCAR. Now, the NASCAR thing didn't rub off - I still think that's the biggest, most irresponsible waste of gas ever. But I got to watch some pretty exciting Braves games in '91 and '92. I even started to appreciate pitching duels - a couple years earlier, I would've said, "How can you sit through 3 hours of a 1-0 game and call it exciting?". Watching Smoltz, Glavine, and later Maddux, I started to understand. I love that baseball has so many nuances. There is always something to learn. It's really not complicated, but there so many strategies for how to play the game. Moving to Boston cemented it. Baseball is such a huge part of the culture here, and I love that when I walk into a store or a bar - or anywhere - during baseball season, there is always something to talk about with the person next to you. And then, of course, there is the atmosphere of baseball - whether it's in a big stadium, a small old park like Fenway, a minor league field, or a little league field - it's the same: blue skies, the smell of grass, a cold beer, a hot dog, and cheering fans. I will be a baseball fan for life.

I should also mention that my UNC Tar Heels won the National Championship in 1993 - my freshman year. My dorm was across the street from the Dean Dome, and I camped out for tickets and hated Dook along with everyone else. It's infectious. I often ask my sister, also a UNC grad, how she managed to graduate from UNC without a passion for basketball. I don't understand, but I guess she ran in a different crowd. Her loss. I will be a Tar Heel fan for life.

I recently ran across this in Bill Simmon's site on ESPN.com:

Nobody has ever summed up being a sports fan better than the New Yorker's Roger Angell in his piece "Agincourt and After," in this passage about Carlton Fisk's famous home run in the 1975 World Series:

It is foolish and childish, on the face of it, to affiliate ourselves with anything so insignificant and patently contrived and commercially exploitive as a professional sports team, and the amused superiority and icy scorn that the non-fan directs at the sports nut (I know this look -- I know it by heart) is understandable and almost unanswerable. Almost. What is left out of this calculation, it seems to me, is the business of caring -- caring deeply and passionately, really caring -- which is a capacity or an emotion that has almost gone out of our lives. And so it seems possible that we have come to a time when it no longer matters so much what the caring is about, how frail or foolish is the object of that concern, as long as the feeling itself can be saved. Naivete -- the infantile and ignoble joy that sends a grown man or woman to dancing and shouting with joy in the middle of the night over the haphazardous flight of a distant ball -- seems a small price to pay for such a gift.

I have no idea if I will be able to keep this up, but I like the thought of keeping a blog. It's keeping a journal - just one you make public. I've never been good at keeping a journal, but maybe that's because I never knew what to write. So I'm going to use this to organize my thoughts, write down things that I want to do better, share fun things about my life, opine about books/movies/music, and otherwise share things that I love. And no pressure on how often I get out here with updates. It is fun to have a place to share opinions or just spend time thinking about all the fun things in life. Life is good. Enjoy!
Posted by Mary No comments: 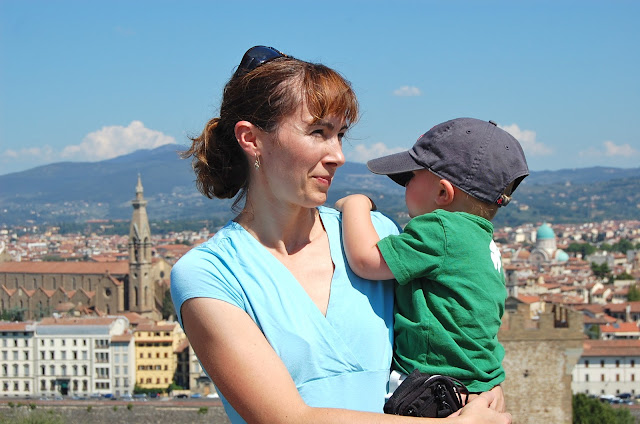 Hi! My name is Mary, and I live in the suburbs of Boston with my husband and two boys.  I am currently taking a break from working full-time, and I am enjoying the opportunity to walk my kids to school and take care of things at home.  I started this blog to have just a little space of my own, and now I'm hooked.  I use it to keep track of all the awesomeness of life.  It's my happy place.  I hope you find something here that makes you happy, too.

Do we have anything in common?  Follow along!  Thanks for visiting! 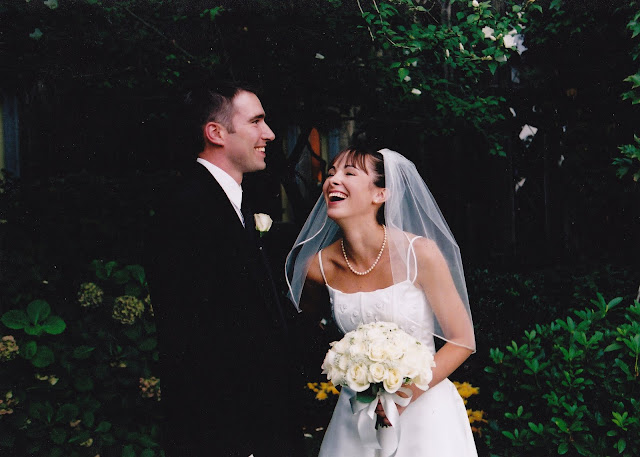