I've been a fan of Kristin Hersh since college, when I discovered Throwing Muses (thank goodness for college radio).  Kristin and her stepsister, Tanya Donelly, went on to perform in other bands as well as put out solo albums, and I've followed both of them through the years.  However, I'll admit that it had been a while since I had listened to Kristin.  Then I picked up her new album, Crooked

.  It is awesome.  I should perhaps mention that her voice is an acquired taste - gravely and harsh at times, but it's pure and it's honest.  The guitar on this new album is also really cool, and I find myself listening to songs over and over again just to hear the guitar.

The above video shows Kristin playing a song from Crooked.  And here is an interview with Kristin that I found really interesting.  I love and agree with the interviewer's intro:  It’s a joy when a person whose  work you appreciate turns out, at least within the context of whatever exposure you have to them, to be congruent to the highest ideals and possibilities of that work. ... The artist’s life in her instance turns out to be…. just life. Family, work, artistic pursuits, creating community, this has all become part of a somewhat seamless process of living a very full and “observed life”, truly the only kind worth living, in a mindful, creative and inclusive manner. 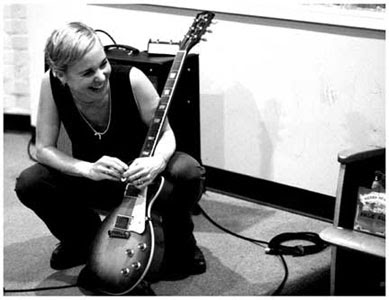