Juliana has a new album

out.  Actually, it came out in February, but I haven't posted about it yet.  The video above is actually from her previous album - there aren't any videos from her latest, entitled Peace and Love

.  It is a good album, if a bit more sparse than some of her other music.  She did the entire album herself - composed, performed, produced, mixed, and engineered.  It sounds like exactly what I am sure it was:  a girl by herself in a room, writing and singing songs about her life.

Juliana also has a web site, which includes a blog she started this year.  I'm interested to see where she goes with it.  I really enjoyed getting to know her a little bit via her memoir, and I think she leads an interesting life. It's certainly very different from my own, so perhaps that's part of why I find her appealing. I'm mostly just happy she continues to make music. 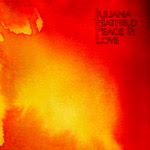