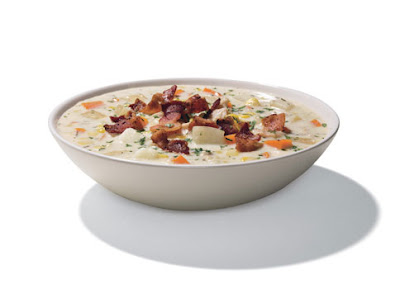 I've already told you that I love chowder, but despite my claims, I had never made it at home. After comparing a few recipes, I chose this one from Bon Appetit to attempt for week 5 of the Online Cooking Club. I like the additional vegetables - carrots, corn, potatoes - and anything with a little bacon sprinkled on top is okay by me (and certainly okay by my husband and toddler). I used 3 cups of half and half and 1 cup 1% milk. You could use whole milk as called for by the recipe, or go richer with half and half.
This is absolutely going in the recipe binder. It was awesome! It did take a little longer than I anticipated due to the chopping, and I think the potatoes take a little longer than 10 minutes. However, my husband described this as "restaurant quality", and after having it again the next day, he took the last few bites and said, "I'm sad the chowder is almost gone". The big boy liked it - he didn't eat a ton, but he ate it and liked it fine. This one's probably more for the grown-ups. I think it makes more than 4 servings - 6 perhaps - and it'd be good for company.


Definitely a keeper!
Posted by Mary