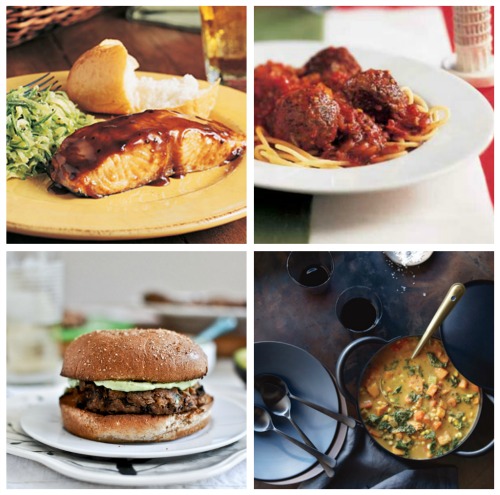 pictures from Cooking Light, Saturday Evening Post, and How Sweet It is (links below)

Spaghetti and Meatballs, Salad
An old favorite.  With grated carrots added to the meatballs.

Double Bean Burgers with Avocado-Basil Cream, Spicy Oven Fries
A new favorite, at least for me.  This is the best veggie burger I've made so far.  They actually had really good consistency and did not fall apart.  I love the addition of white beans.  The cream really does make the burgers though.  It is awesome!  The boys didn't want the cream, although Aaron dipped his fries in it.  He ate almost his entire burger and then, with two bites left, declared he didn't like it.  Ha.  I might add an onion or something to the burger so it has a little more flavor on its own.  Definitely a keeper.

Sweet Potato, Corn, and Kale Chowder
Another veggie success!  I used this recipe as an outline, but I did not make it vegan.  I used regular butter and milk, and I topped it with a little parmesan.  The boys did really well with it, although they both told me I needed to chop the kale into smaller pieces.  Duly noted.  Another keeper!  Yay!

Also, on a very random note, I made these leek fritters a couple weeks ago and neglected to post about it.  I should, because I loved them and will make them again.  I actually only made them because I ended up with three extra leeks after asking Aaron to get a leek at the grocery store.  We only needed one, and I didn't notice that he put one bunch in the cart.  I remembered noticing this recipe in the Smitten Kitchen cookbook, and it called for exactly three big leeks...seemed like it was meant to be.  So I made them, and loved them, and the lemon cream sauce is awesome.  I had them for lunch every day that week.  So if you ever end up with a few extra leeks, give it a try.
Posted by Mary