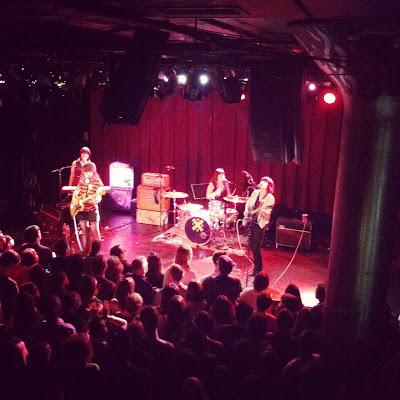 A full and pretty fun weekend.  On Saturday morning, we went on a family outing to a stone warehouse.  Doesn't that sound like fun?  I was so dreading it, and feeling a little bad for dragging the boys; but in fact they were pretty impressed by walking through a warehouse full of stone slabs, seeing the forklift in action, and watching a big crane-type thingie (not its official name I'm assuming) picking up the batches of stone.  I was also worried that we wouldn't find what we were looking for:  a stone that looks like soapstone but isn't soapstone.  (We love the look of soapstone, but it is extremely high-maintenance.)  But we did!  And now we feel good that we've checked off one more item on the "Renovation 2012" list.
On Saturday night, I dragged Kevin to a Wild Flag concert.  I say dragged, because he is not really a fan.  I am, though, and it was my birthday last week, so...  It was a great time.  They put on an awesome show, and I especially loved watching Janet Weiss on drums.  All of them can rock, but she is really something else.
Sunday was a low-key day, as all Sundays should be.  Lots of playing outside, an afternoon birthday party, and preparations for the week ahead.  I also baked a rock-hard pound cake to enjoy the season's first strawberry shortcake.  (It was dense for sure - think I may've overmixed it or something, but if you smother anything with whipped cream, it's still going to taste pretty good.)
Goals for the week:
1.  Sleep.  Going to make it my goal to be in bed by 9 every night.  It won't happen, but I'm going to try.
2.  Start thinking about our 2012 "Summer Fun List".  It may be early, but it's never too early to plan for fun.
3.  Think positive about the 2012 Renovation.  The stress has already started creeping in, and it's really too early for that.
4.  Plan a menu for the week.  I went to the grocery store three times last week and I still don't have some of the things we need.  I hate being unorganized.
5.  Put a note in the mail to a friend.  It's fun getting unexpected personal mail, isn't it?  It's fun sending it too.
Posted by Mary