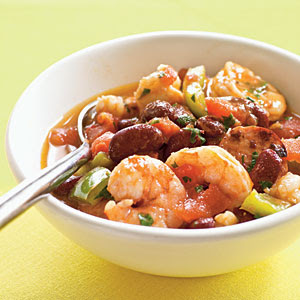 *Image from Cooking Light
For week two of the online cooking group, I chose to make two new recipes. My first recipe was from Cooking Light, which you'll notice is a favorite of mine. It was a Creole Shrimp and Sausage Stew. The results? Pretty good, but not great. Probably won't become a regular. On the positive side, Aaron did well with it, eating everything except the peppers. It's also extremely fast and easy to make, so it is a great weeknight meal. I served with a multigrain crusty bread that was yummy to dip in the stew. On the negative side, I'd say it's just a bit bland. Perhaps a little extra spice would help kick it up a notch or help make it a bit more memorable.

My second recipe was from a cookbook I received as a gift - Healthy Cooking for your Kids. It was called Creamy Pasta Bake, and I chose it primarily because I was looking for a way to use the leftovers from Sunday's roast chicken.

The results? Pretty good. Aaron liked it - even the broccoli and mushrooms - so in that regards, it was a success. And it could easily be made vegetarian by simply omitting the chicken. We did use the whole wheat pasta - I'm becoming much more successful at doing that. I will probably make this again, but the only reason it won't make the regular rotation is because it is a little higher maintenance than my other standards. It made a lot of dirty dishes.

Sorry I neglected to take a photo, but here's the recipe if you're interested:

Creamy Pasta Bake, from Healthy Cooking for Your Kids

Preheat the oven to 375F. Cook pasta for 10-12 minutes or until tender, then drain. Meanwhile, heat the oil in a large skillet and cook the mushrooms until beginning to brown. Boil or steam the broccoli until just cooked, then drain. Add chicken to the mushrooms and stir well. Blend the cornstarch with a little milk in a pitcher, then gradually add the remaining milk, stirring. Pour into the pan, add the sour cream, and warm through, stirring. Add the pasta and broccoli to the skillet and season to taste with salt and pepper. Mix well, then transfer to a baking dish, top with cheese, and bake in the preheated oven for 15 minutes. Serve hot.
Posted by Mary