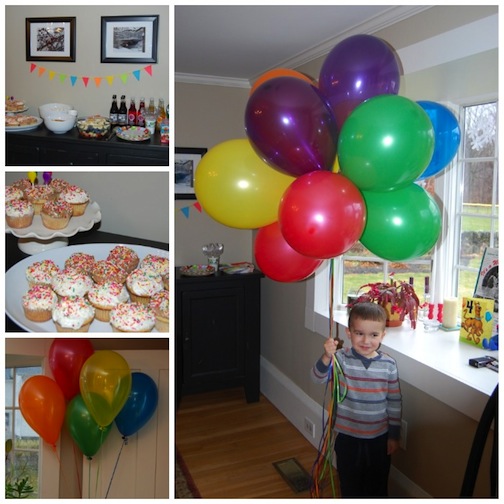 Well, the birthday party was a definite success!  Aaron was so proud to have his friends at his home, and he had a ton of fun, which was of course the goal.  I let him lead the way, so everything was as he wanted.  He chose the colors and snacks.  He helped me make a mix of his favorite music to play.  He picked out the stickers everybody used to decorate their goody bags.  He was proud of the results, and he had a great time.

The weekend also included a trip to the library, where the boys got to see Santa, so in the words of my big boy, "It was an awesome awesome weekend!"

See
-  Little kids clung to their moms' legs as they walked in
-  Aaron wanted rainbow colors, so that's what he got:  balloons in every color, rainbow sprinkles on the cupcakes, rainbow goldfish, rainbow candies and toys in his rainbow pinata...
- Aaron got a hug from one of his girl friends before she left.  There is nothing cuter.
Hear
- All the kids squealed as the rainbow pinata spilled its contents (finally!)
- Aaron's favorite songs provided the soundtrack to playtime
- Everybody sang "Happy Birthday" to my almost 4-year-old, as he hid behind his hands and wished they'd all stop looking at him
Touch
- The pinata did not want to open, but I made it!
- I got lots of hugs and cuddles from Aaron, who wanted to stay close to me most of the time
Smell
- Hot apple cider, simmering on the stove
- Rain - it was a dreary wet day, but the atmosphere inside was sunny and colorful!
Taste
- Homemade yellow cupcakes with vanilla or chocolate frosting (with rainbow sprinkles of course!)
- Root beer and other sodas for the adults, juices for the kids
- Popcorn, goldfish, and fruit salad - Nobody ate much, though.  They just wanted to play!