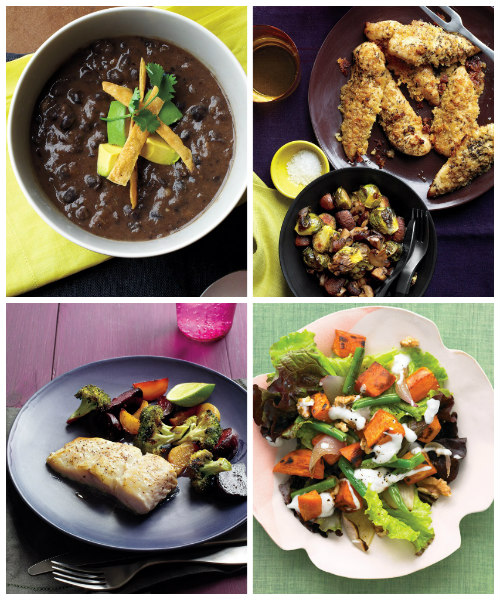 I haven't done one of these in a long time. I've been stuck in a bit of a rut, making the same dinners over and over. There's nothing really wrong with that, as most of the dinners are healthy and enjoyed by all, but I do like to mix it up every now and then. I get bored, and I especially want to make sure my boys are game for trying new foods. I somehow managed to spend a bit of time looking through some of my old magazines, and I found a few recipes to try. Here's what went down last week...

Spicy Black Bean Soup
Winner! First, I love soups. They're warm and yummy in the winter, the boys generally do well with them, and they're an easy vehicle for veggies. But I hadn't tried a new one in a long time. Nathan likes black beans, so I thought I'd give this a shot. The main reason why this was a success was that he helped me make it. It was his first attempt at cooking on the stove, and he was extremely proud. I was a little worried that it might be too spicy, so I only included 1/2 of a jalapeno - I could've added more. But it was easy, super yummy, and healthy! The boys agreed that adding chopped avocado as a garnish is the best - they said sour cream made it taste too much like chili. Absolutely a keeper!

Parmesan Chicken with Mushrooms and Brussels Sprouts, Potatoes
Not super exciting, but another success overall. I don't eat chicken, so I had a salad with the roasted veggies. And I took the leftovers with me for lunch.

Seared Fish with Beets and Broccoli, Beet Greens, Rice
I used cod for this, and it was okay, but I think I've determined that I prefer a flatter fish such as flounder for this type of dish. I loved the veggies, though. I had never cooked a fresh beet, and it was pretty easy - will definitely do it more from now on, because after loathing them as a kid, I now rather enjoy them. I also sauteed up the greens with some garlic and olive oil - yum!

Red Leaf Salad with Roasted Sweet Potatoes
This is my favorite winter salad.  Kevin and Aaron had leftover chicken with it; Nathan had a plate of sweet potatoes, walnuts, green beans, and cheese.  Works for me!