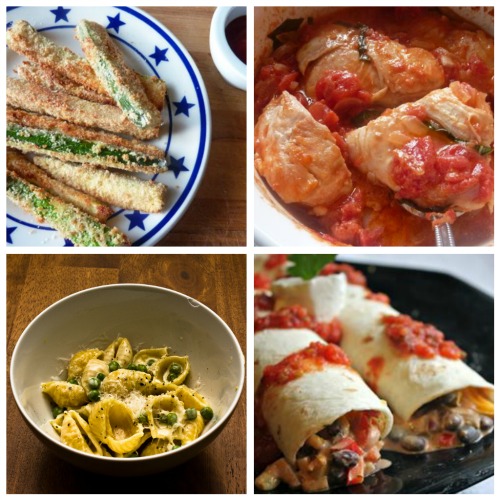 images from Dinner: A Love Story, Smitten Kitchen, and Epicurious

Turkey Burgers, Zucchini Fries
This was a big hit.  The burgers were very flavorful, thanks to the addition of a single tablespoon of barbecue sauce to the ground turkey.  My husband had to ask whether or not they were actually turkey burgers!  Awesome.  And the zucchini fries were good.  Nathan ate all of his, and he even ate all the leftovers with his lunch the next day!

Broccoli-Cheddar Soup, Warm Crusty Bread
I can't remember the specific recipe I used - I'm pretty sure I just looked at a bunch of them and went for it.  They are all very similar.  The keys are to use vegetable broth instead of chicken, grate the carrots, and use good sharp cheddar (don't think adding a bag of already-shredded mild cheddar is going to get you the flavor you want).  It's soooo good, and the boys love it too!  Aaron declared this his favorite soup ever, right after clam chowder and corn, leek, potato chowder.  Oh, and I made this a few weeks ago and froze half of it, so this week I got to pull it out on baseball night.  Hooray!

Baked Chicken in Creamy Tomato Sauce, Brown Rice, Red Leaf Salad with Carmelized Walnuts,  Cranberries, and Apples
This is a really easy chicken dish.  It needed a little added salt, but it was very good.  Aaron loved it.  Nathan wouldn't eat it, but he's not a meat guy anyway.  I served corn and peas for the boys instead of the salad.  Not sure if this will stay in the regular rotation.  Mostly because it calls for a few tablespoons of mascarpone cheese.  Now I have the rest of the container, and it won't last long - what do I do with it?  (Update:  I had some on my toast this morning, topped with orange marmalade - Yum!)

This is the first recipe I've tried from my other new cookbook, The Smitten Kitchen Cookbook.  It's very simple, and it looks just like the Annie's Macaroni & Cheese the boys love so much.  I always serve their mac 'n cheese with peas too, so this really was just a homemade version.  It calls for a little lemon zest as well, which is a nice addition that brightens the flavor up.  Definitely a keeper.

Black Bean and Corn Burritos, Guacamole, Tortilla Chips
This is one of our typical Friday night meals.  Can't go wrong.
Posted by Mary