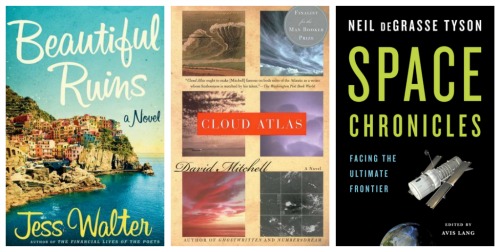 , by Jess Walter - "The story begins in 1962. On a rocky patch of the sun-drenched Italian coastline, a young innkeeper, chest-deep in daydreams, looks out over the incandescent waters of the Ligurian Sea and spies an apparition: a tall, thin woman, a vision in white, approaching him on a boat. She is an actress, he soon learns, an American starlet, and she is dying.  And the story begins again today, half a world away, when an elderly Italian man shows up on a movie studio's back lot—searching for the mysterious woman he last saw at his hotel decades earlier."
A gorgeous book.  It jumps around a lot, switching settings and styles and points of view, so it can be a little difficult to get swept away by it.  That said, I loved the story and thought it was really rewarding.

, by David Mitchell - Yes, I've read this one before.  But with the movie coming out, I felt compelled to pick it up again.  I didn't want Tom Hanks and Halle Berry to completely replace the images in my head.  I'm really glad I re-read it.  It was even more enjoyable the second time, perhaps because I understood the structure going in.  I was able to soak in all of the amazing details and connections between the stories.  It's a fascinating book.

, by Neil DeGrasse Tyson - Every now and then, I like to pick up something in the non-fiction section.  And Astronomy remains one of my interests, ever since watching shooting stars as a kid.  Neil DeGrasse Tyson is an astrophysicist who has the amazing talent of being able to explain the most complex ideas to non-scientists.  He's inspiring and really fun.  This book is basically a compilation of a lot of his essays and interviews, and there is some overlap along the way.  It'd be an easy one to pick up every now and then just to read a short interview and be inspired.
Posted by Mary