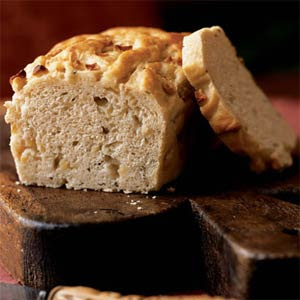 *Image from here
I had a few small apples that were past their prime for eating raw but still perfectly acceptable for cooking. I also had a cool and dreary Sunday afternoon, so I decided to bake something. I chose this Apple Pecan Quick Bread. I like this recipe, because it requires only one bowl and no beaters; it is very fast to prepare and get in the oven. And - it's yummy! I didn't have pecans, so I used walnuts instead, and threw in a few craisins while I was at it. Now K and I have breakfast for the week! Yum.
*I noticed that the reviews for this recipe are all over the map, but it also seems like a lot of people tried to mess with the recipe and then complain about it. I didn't find it bland at all, but some cinnamon might be a nice addition. Sprinkling some brown sugar on top might be nice, too - I love crispy sweet toppings. Definitely chop the apples instead of grating them.
Posted by Mary