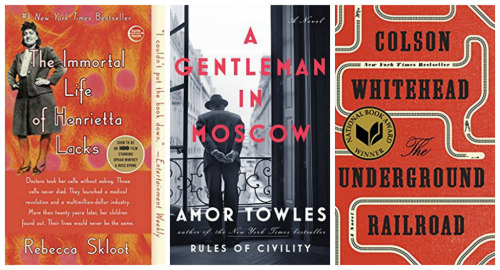 The Immortal Life of Henrietta Lacks, by Rebecca Skloot.
What a fascinating book! I had never heard of HeLa or this story until it was recommended to me by some coworkers. It was suggested as a topic for our book club, and I am so glad it was! It's the story of Henrietta Lacks, a poor black woman who died of cervical cancer in the early 1950s. The doctors took some of the cancerous cells from her tumor, without her knowledge or consent, and those cells ended up becoming a vital tool in the scientific community, contributing to the development of vaccines and other medical advancements. The book balances the scientific talk with the story of Henrietta and her family, as well as the author, who went on this journey with them to shine a light on Henrietta's life. I highly, highly recommend.

A Gentleman in Moscow, by Amor Towles.
I very much enjoyed this book, as I did his first book (Rules of Civility). The writing is wonderful, and he does such a good job of creating the setting. I am transported to the Metropol - a hotel in Moscow - in the1920s. Every scene is beautifully described, and I'm not distracted by the details, but rather I am absorbed by them. The story spans several decades and almost never leaves the hotel, and yet the story remained interesting the entire time. And the ending....well, let's just say that I adored the ending. Very satisfying.

The Underground Railroad, by Colson Whitehead.
I'm not exactly sure how I feel about this book. Part of me wishes I had a book club group to discuss it with, because it is certainly worthy of discussion. I do think that it is a fresh and unique approach to telling a story about slavery. On the other hand, making the underground railroad a literal thing felt odd and seems to somehow take away from the actual history. The book contains one main character - a slave girl named Cora - but her journey takes her to so many places that it often feels like separate stories as she moves from place to place. That said, those stories are powerfully depicted, they stay with you, and they make you think about what they say about race relations today. Overall, I liked the book, and it's absolutely worthwhile.
Posted by Mary