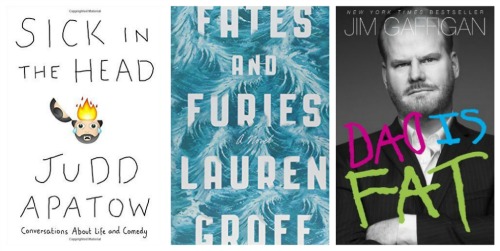 Sick in the Head:  Conversations about Life and Comedy, by Judd Apatow.
I enjoyed most of this book a lot. It's a collection of interviews, some of which come from Judd's high school years, working as a host of a school radio show. And some of them are more recent. Some of them are a little boring, especially when I wasn't familiar with the subject; and some of them were a little repetitive, since they sometimes talk about similar topics (how Judd started out in comedy, who his favorites are, etc). But the good ones are great. It was a lot of fun to hear comedians talk about their work - it's too easy to think that comedy isn't as much work as it is, but I can appreciate the effort that must go into crafting a good joke, or putting together enough material for an hour-long special, or having to come up with new material constantly (especially in this age of social media). The interview subjects are fabulous: Jerry Seinfeld, James Brooks, Amy Schumer, Chris Rock, Ben Stiller and Jim Carrey...  It's not written to be funny, although it sometimes is. It's written to give you an idea of what it's like to be a comedian. Or at least, what it's like to have a conversation with one.

Fates and Furies, by Lauren Groff.
"Marriage is made of lies: kind ones, mostly. Omissions. If you give voice to the things you think every day about your spouse, you'd crush them to paste. She never lied, just never said."
This is a fascinating book, and it's one you'll continue to think about long after it ends. It's the story of a marriage, written from different perspectives. The characters are fully-developed, and although it took a little while for me to get into it, I was enthralled by the end.

Dad is Fat, by Jim Gaffigan.
Sometimes you just want a laugh. I got this book for Kevin, because I thought he'd get a kick out of it. After hearing him giggle every night while he was reading it, I picked it up. Jim Gaffigan has five young kids, and he lives in a two-bedroom apartment in New York City. (That last sentence stresses me out just to write.) The book has a lot of silly parenting stories, and it is also a love letter to his wife, who he praises throughout. It's a fun, fast, easy read.
Posted by Mary